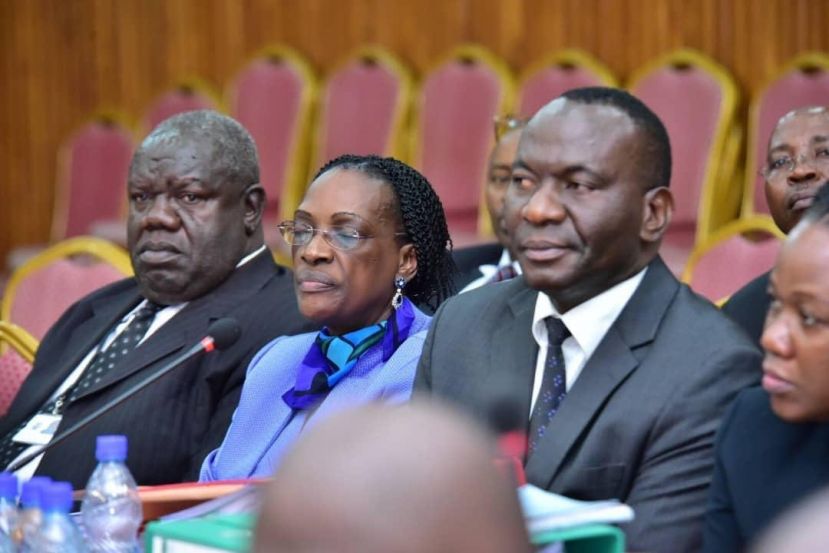 COURTESY PHOTO According to Auditor General, parliament and police, Kasekende, Bagyenda, Sekabira and other Bank of Uganda technocrats mismanaged the central bank.

The Directorate of Public Prosecutions (DPP) has ordered police to round up, question and search the homes of a city lawyer and two former officials and one current official of Bank of Uganda, Trumpet News reported on Friday.

The order by DPP brings a ray of hope to the owners of the defunct International Credit Bank (ICB), Greenland Bank and Cooperative Bank whose properties were taken over and sold by Bank of Uganda, in a process that the Parliament of Uganda found to be flawed.

Under the case, with reference number Ref: HQS-CO-0191-2020, police and DPP are investigating circumstances under which certificates of titles belonging to former clients of the above three defunct banks ended up in the possession of a city lawyer, Mr. Kakembo Katende of M/S Kirkland Associates.

The case was opened by the Criminal Investigations Department (CID), on recommendation of the Parliamentary Public Accounts Committee on Commissions, State Authorities and State Enterprises (PAC – COSASE) to investigate circumstances under which Mr. Kakembo came to be in possession of the land titles, yet they were to be in the possession of Nile River Acquisition Company Ltd (NRAC), the company incorporated by Octavian Advisors, the American company that originally bought the assets of the defunct banks.

Shortly after acquiring the assets, NRAC appointed SIL Investments, a company incorporated a few weeks before the sale of the assets to manage the recovery process in Uganda.

Kakembo’s law firm, M/S Kirkland Associates was hired by Bank of Uganda to advise on the disposal of the assets. An investigation by this website later found a close link between NRAC, SIL Investments, the company appointed by NRAC to handle the sale in Uganda and Kirkland Associates.

It shall be remembered that one of the major issues probed by the MPs on COSASE, is why and how assets (loans) belonging to International Credit Bank (ICB), Greenland Bank and Cooperative Bank Assets (loans) amounting to UGX 135 billion were sold to NRAC USD5.25m (Shs8.9bn), causing a loss of UGX126 billion, according to the Auditor General.

The sold assets included UGX34 bn of loans that had valid, legal and equitable mortgage supported by proper legal documentation. According to the AG, the UGX8.9bn sale price, represented 26% of the total secured loan portfolio and 7% of the total loan portfolio.

Writing to the Director of the CID, Odiit said that to fast-track the case amidst hostile suspects, some of whom were now on the run, it was important to secure a court order to round up the suspects, search their homes, obtain statements and retrieve the said titles.

“For meaningful inquiries to be carried out, there is need to ensure that the said certificates of title are recovered. We shall thus need the assistance of court through Court Orders to properly facilitate our inquiries.

These court orders may include criminal summons, warrants of arrest, search warrants etc., and yet these orders can only and properly be secured when we have a matter before court. Therefore, in the meantime we need to have a case registered in court for that purpose for now,” Odiit wrote.

“You are therefore directed to ensure that you prepare a charge sheet ready for court in respect to the offence of concealing a title deed C/S 278 of the Penal Code Act. There ought to be a count for each of the titled deeds we currently have and from the complainants so far.

The probable suspects include; Kakembo Katende and all his associates/partners trading as M/S Kirkland Associates, Nanyonga Evelyn and all her co-Directors in SIL Investment Ltd and the coordinators of the defunct commercial banks in liquidation, a one Ben Sekabira together with Polly K. Ndyarugahi his co-coordinator. Have all the suspects arrested and ‘arraigned in court,” Odiit instructed the CID.

“Record statements from the former Deputy Governor of Bank of Uganda one Louis Kasekende and one Justine. Bagyenda (Mrs). Evidence on record indicates that they were as well involved in this saga,” Oddit further orders.

In an attempt to establish whether there was a link between Kasekende, Bagyenda and Sekabira, the DPP has also ordered that the CID obtains from the Ugandan Financial Intelligence Authority (FIA) information about an American company called Octavian Advisors, which, through NRAC bought the said assets.

The DPP also wants police to “record a statement from the proprietor of SIL Investments Ltd in respect to its association with Octavian Advisors, Kirkland Associates, Ben Sekabira and other Bank of Uganda employees.”