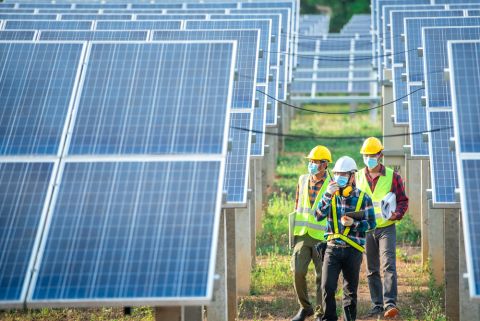 The world’s incredible decrease in energy consumption caused by COVID-19, and the unprecedented collapse of the oil and gas markets has some arguing that 2019 was the peak for oil and clean energy will dominate in the years ahead.

The session highlighted the impact of COVID-19 on global renewable energy development discussions. According to Massaer Cissé: “COVID-19 has sparked a new discussion on the importance of renewables and we can expect renewable energy to be central topic in all conversations to come,"

"According to the International Energy Agency, 72% of all installed power capacity globally in 2019 originated from renewable energy, and it expects it to grow in 2020, despite the pandemic. COVID-19 is by definition a shock but it’s a temporary event. The long-term trends preexisting prior to the pandemic remain true today.

Renewable energies are now very competitive and are able to function without subsidies. Africa’s impact is relatively small on the global scale for global warming and climate change; however, we are primarily impacted. Therefore, Africa has a responsibility, beyond economic considerations, to contribute to finding solutions. I believe the renewable energy outlook remains very positive.”

Nelisiwe Magubane, from Matleng Energy Solutions, expressed concerns around the pandemic encouraging countries to halt the race to renewables and focus on indigenous assets, including fossil fuels: “We have seen countries having more nationalistic agendas in order to protect their assets and revitalize their economies, thus translating to the use of more indigenous resources.

Africa is well-endowed with renewable energy resources and it has become very competitive compared to other energy sources. However, it can’t meet peak demand, depending on the country. Other energy sources are needed to complement renewables, and the overall goal is to lower emissions, rather than aim right now to bring it down to zero. We need to have a pragmatic approach to deploy an energy mix benefitting the country and the environment.

Suzanne Jaworowski, from the U.S. Office of Nuclear Energy underlined the importance of market volatility and reliability issues linked to the energy sector globally, and how the pandemic has highlighted those two challenges as central to a sustainable energy sector.

As an advocate for the development of nuclear energy, Suzanne highlighted technology advancements which make nuclear a viable option for African countries in terms of cost as well as security: “Nuclear is a serious option to be considered in terms of energy transition. Smaller modular reactor designs which will come online in the next few years are economically competitive with combined cycle natural gas plants. Of course, each country must decide what is best, but major nuclear technology advancements make it worthy of taking it into account. Nuclear is a lot more accessible cost wise making it a viable option.”

The discussion also touched on natural gas as a prime fuel for energy transition. As an energy specialist in South Africa, Dr Clinton Carter-Brown commented: “Ninety percent of South Africa’s electricity runs on coal. We have one of the highest numbers of emissions per capita across the globe. The shift from coal to renewable is particularly key in our country, economically and in regard to the energy transition. Natural gas will have a major role play in the transition, provided we are able to build the appropriate processing and transport infrastructure. The energy transition will create immense employment opportunities and is a major challenge in the years coming up.”

Finally, the discussion touched on localization and local content. Although it is hot topic in the oil and gas space, local capacity development is equally, if not more, important in the renewable energy sector as it is home to major technology innovations.

Nelisiwe Magubane brought up the issue of intellectual property as a key component of the regulatory frameworks to be designed by governments: “Renewable energy is an opportunity for African countries to create proprietary technology, be strict about intellectual property and drive technological innovation and energy independence.”

Final words from Massaer Cisse underlined that the renewable energy revolution has not been hindered by COVID-19. “We all agree that the current situation is not sustainable. Energy sources don’t need to be mutually exclusive. Oil, nuclear, natural gas, coal have the biggest role to play. Renewables is here to stay and grow.” 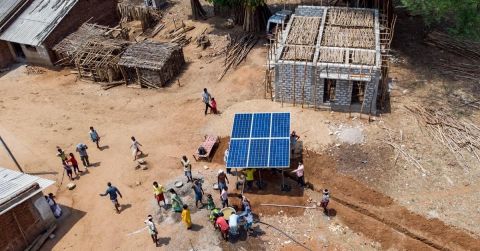 Despite accelerated progress over the past decade, the world will fall short of ensuring universal access to affordable, reliable, sustainable, and modern energy by 2030 unless efforts are scaled up significantly, reveals the new Tracking SDG 7: The Energy Progress Report released on Thursday by the International Energy Agency (IEA) the International Renewable Energy Agency (IRENA), the United Nations Statistics Division (UNSD), the World Bank, and the World Health Organization (WHO).

According to the report, significant progress had been made on various aspects of the Sustainable Development Goal (SDG) 7 prior to the start of the COVID-19 crisis. This includes a notable reduction in the number of people worldwide lacking access to electricity, strong uptake of renewable energy for electricity generation, and improvements in energy efficiency. Despite these advances, global efforts remain insufficient to reach the key targets of SDG 7 by 2030.

“Renewable energy is key to achieving SDG 7 and building resilient, equitable and sustainable economies in a post COVID-19 world. Now more than ever is the time for bold international cooperation to bridge the energy access gap and place sustainable energy at the heart of economic stimulus and recovery measures. IRENA is committed to scale up action with its global membership and partners to channel investment and guide policy intervention in pursuit of sustainable development for all humankind,” said Francesco La Camera, Director-General of the International Renewable Energy Agency (IRENA).

The number of people without access to electricity declined from 1.2 billion in 2010 to 789 million in 2018, however, under policies that were either in place or planned before the start of the COVID-19 crisis, an estimated 620 million people would still lack access in 2030, 85 percent of them in Sub-Saharan Africa. SDG 7 calls for universal energy access by 2030.

Other important elements of the goal also continue to be off track. Almost 3 billion people remained without access to clean cooking in 2017, mainly in Asia and Sub-Saharan Africa. Largely stagnant progress since 2010 leads to millions of deaths each year from breathing cooking smoke. The share of renewable energy in the global energy mix is only inching up gradually, despite the rapid growth of wind and solar power in electricity generation. An acceleration of renewables across all sectors is required to move closer to reaching the SDG 7 target, with advances in heating and transport currently lagging far behind their potential. Following strong progress on global energy efficiency between 2015 and 2016, the pace has slackened. The rate of improvement needs to speed up dramatically, from 1.7 percent in 2017 to at least 3 percent in coming years.

Accelerating the pace of progress in all regions and sectors will require stronger political commitment, long-term energy planning, increased public and private financing, and adequate policy and fiscal incentives to spur faster deployment of new technologies An increased emphasis on “leaving no one behind” is required, given the large proportion of the population without access in remote, rural, poorer and vulnerable communities.

The 2020 report introduces tracking on a new indicator, 7.A.1, on international financial flows to developing countries in support of clean and renewable energy. Although total flows have doubled since 2010, reaching $21.4 billion in 2017, only 12 percent reached the least-developed countries, which are the furthest from achieving the various SDG 7 targets.

The five custodian agencies of the report were designated by the UN Statistical Commission to compile and verify country data, along with regional and global aggregates, in relation to the progress in achieving the SDG 7 goals. The report presents policymakers and development partners with global, regional and country-level data to inform decisions and identify priorities for a sustainable recovery from COVID-19 that scales up affordable, reliable, sustainable and modern energy.

This collaborative work highlights once more the importance of reliable data to inform policy-making as well as the opportunity to enhance data quality through international cooperation to further strengthen national capacities. The report has been transmitted by SDG 7 custodian agencies to the United Nations Secretary-General to inform the 2030 Agenda for Sustainable Development’s annual review. 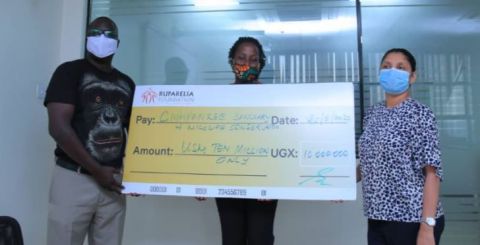 Ngamba Island Chimpanzee Sanctuary has received a Shs10m donation from businessman Dr Sudhir Ruparelia to help in the feeding of Chimpanzees.

The donation was received by Joshua Rukundo, the Executive Director of Ngamba Island who lauded the businessman for the generous contribution.

He said the donation will cater for the wild animals facing a tough time due to the COVID-19 lockdown and rising water levels.

“On behalf of the management of Chimpanzee Sanctuary $ Wildlife Conservation Trust (Chimpanzee Trust) and on my own behalf, we would like to acknowledge and send our sincere appreciation for your generous contribution of UGX 10,000, 000 towards the feeding of chimpanzees on Ngamba Island Chimpanzee Sanctuary,” Mr Rukundo said.

Rukondo said they have been at a breakdown state since they could no longer raise the Shs26m needed to feed the 50 chimpanzees every month.

“These funds will go a long way to ensuring the survival of the rescued and orphaned Chimpanzee in our care, as we navigate the effects of lockdown bought about COVID-19 global pandemic.”

Ngamba Island is a project of the Chimpanzees Sanctuary and Wildlife Conservation Trust (CSWCT), established in 1997 and provides a home for over 50 orphaned chimpanzees to live out their lives.

Ruparelia Foundation, the charity arm of Ruparelia Group has for long been supporting chimpanzee conservation efforts on Ngamba Island Chimpanzee Sanctuary, as part of its efforts to support education and conservation of the environment and wildlife. 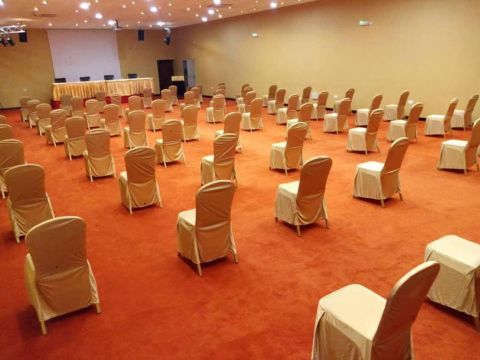 Hotels in Uganda are gearing up to return to full operations after two months of the countrywide lockdown caused by the COVID19 pandemic.

But to be able to do this, the government has asked them to observe the laid standard operating procedures that protect staff members and customers against the virus.

In response, Speke Resort and Conference Centre Munyonyo has come up with a strategy that shall see its clients meet at the luxurious conference centre while assured of their safety.

The resort hotel famous for its top-notch conference facilities has laid out options for delegates at meetings to effectively implement social distancing.

It offers the ultimate in luxury accommodation and leisure facilities together with the finest conference and business meeting location in East Africa.