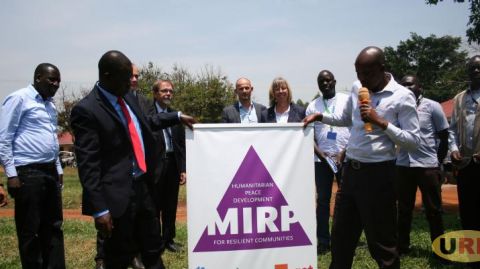 Refugees and host communities in Hoima and Kikuube districts have recently received a multi-billion humanitarian, peacebuilding and development project.

The four-year project worth Sh60 billion dubbed Mutual Inter-Related Resilience Program was launched by the Ola Hallgren, the head of program cooperation at the Embassy of Sweden.

The Project is funded by Act Church of Sweden and will be implemented by the Norwegian Refugee Council, Action against Hunger and Lutheran World Federation.

Speaking during the launch, Ola noted that the project will help in improving the livelihoods of both refugees and host communities.

He commended Uganda for hosting refugees and having good policies which have helped to provide a good haven for the refugees from different countries.

He noted that Uganda currently hosts 1.3 million refugees while Kyangwali hosts 14,700 refugees. He says that donors will continue to give support to Uganda to improve on the livelihood of refugees and host communities.

Professor Augustus Nuwagaba, the project consultant commended funder of the project and warned the project implementers against the misuse of the funds.

He says that several projects have been funded with huge monies but the funds end up not befitting it targeted group due to poor management of the project.

Peter Karslsson Sjogren the Act Church of Sweden’s Africa Director says there is need to exercise transparency and accountability as they implement the project.

Moses Kapuroni, the Kikuube district chief administrative officer says the settlement is facing several social challenges and called for more support to improve on the lives of the people.