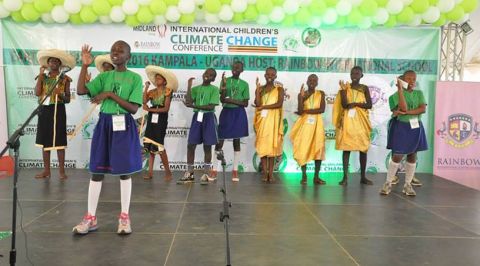 Developing countries like Uganda are at a higher risk of being devastated by the negative impact of climate change. As a preventive measure environmental activists are undertaking initiatives to stop agents of climate change.

One of the agents of climate change is deforestation which is an act of cutting down trees. In a situation where trees have been cut, efforts to re-plant new and more tree is taking shape. Afforestation is being used to curb the devastation caused by the vegetation that was cut down by man. 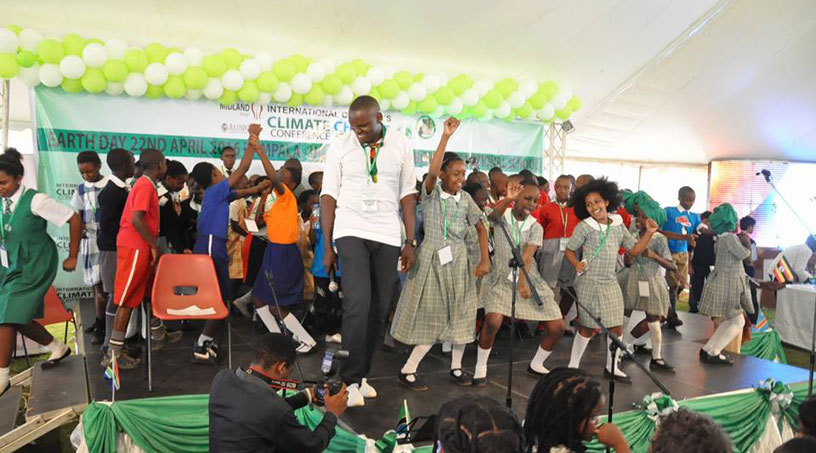 In Uganda, Little Hands Go Green, an organization championing good environmental practices, is using children friendly initiatives to protect the environment. Over the weekend, the organization hosted over 500 children at a one day International Children’s Climate Change Conference 2016. The conference which was also celebrating International Earth Day took place at Rainbow International School.

Children from different schools debated environment and water topics, presented poems, participated in tree planting exercises, made paintings in support of nature, danced and presented their ideas about mitigating climate change. Senior environmentalists were also at hand to answer questions from the pupils.

The annual conference, the third one in a row, was organized under the theme ‘When Water Slows, Trees Die’. It was supported by Midland Group of companies, National Forestry Authority (NFA), NBS Television, National Environment Management Authority (NEMA) and Vivo Energy.

Joseph Masembe CEO of Uganda’s Little Hands Go Green said the only way the environment can be saved is through using the young generation because “they are our future and we must create love for nature in them in order for them to encourage and inspire others.”

Drashna Kotecha, Director of Rainbow said “we must make sure that environment is protected and preserved to have proper living. A conference like this grooms young generation on the importance of nature and that’s why we as Midland Group of Companies joined Uganda’s Little Hands Go Green and we shall support them as long as we can.” 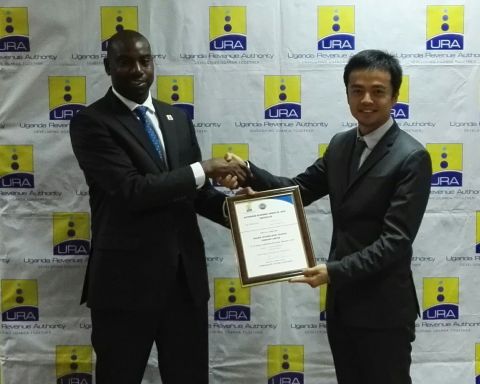 Uganda Revenue Authority has awarded Huawei Uganda with an Authorized Economic Operator Certificate for its customs compliance practices. Huawei will now enjoy trade facilitation benefits of having its customs clearance done in eight hours prior to the previous four or five days. The result of this benefit will enable Huawei provide better services to local business customers and product end-users.

The Authorized Economic Operator Program which is also a world Customs Organization Standard was started by Uganda Revenue Authority in an effort to facilitate and perform its numerous functions in the collection of government Revenue, protection of Society and award of compliant organization to the custom laws, regulations and procedures. It not only enhances government efficiency, helps enterprises improve the internal management, enjoy the trade facilitation measures, but also create more value for the East African Community

“URA is happy to partner with the industry leading company like Huawei since it has global experience. Huawei is qualified as AEO in both China and Uganda, which makes business simplified and quality of services improved since there shall be importation with ease. We look at having customs clearance at a time below eight hours with AEO”, said Dicksons Kateshumbwa, the Acting Commissioner General of Uganda Revenue Authority.

“Huawei is honored to be an Authorized Economic Operator, as a model company and industry leader with an international value chain, using global best practices. This is a very important recognition to Huawei Uganda as a local corporate citizen because we are now among the only five Huawei subsidiaries to achieve this status, among the 170 Huawei serving countries and regions in the World”, said Mr. Stanley Chyn, the Managing Director of Huawei.

Chyn also noted that the AEO Certificate would benefit Huawei in reducing the cost of doing business such as delayed customs clearance days that have an average five days to be reduced to only eight hours, improve quality of service that places Huawei in a better position to offer better services to customers, being trustworthy and business compliant and improve internal control systems which means internal business risks are reduced hence business future guaranteed. 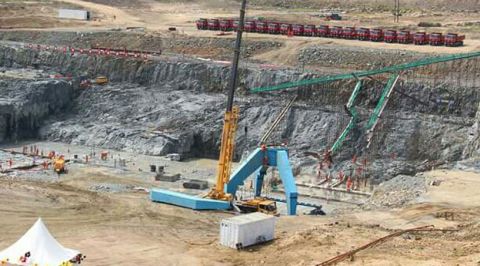 President Yoweri Museveni is considering suspending the construction of multimillion electricity generation dams at Karuma and Isimba because the contractors have continued to do shoddy work even when it has been brought to their attention.

In a letter to the minister of energy and minerals Irene Muloni dated 22nd March, 2016, the president revealed that he had “got disturbing reports that the work being done on the dams of Karuma and Isimba is shoddy because the 'owners' engineers' are either not serious or they have some other issues.”

The president in the same letter received by the ministry on March 23rd, 2016, a day later, goes on to explain that the contractors do not detect faults and do not insist on correcting them. President Museveni therefore demanded “prompt action” from the minister including considering to suspend ‘work until the defects are corrected,’

“My information for instance, points out that there is something known as draft tube, where the turbines are supposed to sit. These draft tubes should be assembled outside the hollow structures that are supposed to be their ultimate home and put in the hollows when they are able to align with the other parts. Instead, I am told, they are being welded in the hollow. i am told that is very risky.” Museveni writes.

“Mistakes are being observed at Karuma. The 'owner's engineers' are informed but they do nothing. I, therefore, direct you to, at once, confirm if these stories are true so that you stop further and more irreversible mistakes. If, for instance, concrete is poured over such defective structures, it will create an irreversible situation of having a defective dam and power house.

If it is necessary to suspend work until the defects are corrected, it should be done. The 'owners' engineers' could either be re-enforced or even dismissed. Re-enforcing them, at the minimum, would mean giving them other actors that to co-sign the completion forms before payments are made.” The president directs in the letter copied to the Vice President.

Karuma dam, according to ministry officials will be ready by December, 2018 when the six turbines will be up and running. The ministry officials, during a field tour this month at the Karuma construction site, noted that underground tunnels to access the power house that will generate about 600MW is almost complete.

Henry Bidasala, the commissioner electricity power development at the energy ministry said 30 percent of the construction work is done. Bidasala told journalists that excavation works of the Karuma hydropower project has been completed and that the contractors Sinohydro Corporation is at the stage of pouring concrete onto the excavated dam site.

An Indian firm, Energy Infratech Private Limited was contracted to perform the feasibility study and supervise works at Karuma while a consortium consisting of engineering firms Fichtner (lead) and Norplan are in charge of Isimba through their sub-contractors Kagga & Partners, a local firm.

The estimate cost of constructing Karuma is put at US $2.2 billion while that of Isimba is valued to be $550 million. Both projects are funded through a loan government of Uganda acquired from Export-Import Bank of China. The two dams are scheduled to be commissioned in December 2018.

The procurement for the lead construction contractors were marred by corruption scandals that led to the delay of construction works to take off. And now talk of shoddy work risks suspension of the much needed projects considering the energy deficiency in the country. 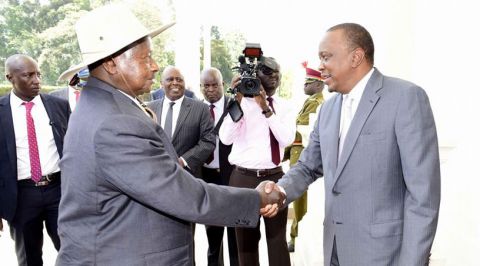 Uganda continues to indecisively hobnob with both neighbors Tanzania and Kenya regarding which route the landlocked nation will use to export her crude oil using a pipeline to the Indian Ocean. Uganda boosts of about 6.2 billion barrels of crude oil which it partly plans to export.

The Monday meeting however was inconclusive as the two leaders said their technical staff need more to look into the matter further. The two leaders in a statement said they will meet in two weeks’ time in Kampala when they can make informed decisions.

Uganda has three options through which she can transport her oil for export through the Indian Ocean to the world. The options are the Northern Route through Lokichar leading to Lamu port and the Central Route that stretches direct to Mombasa. The third choice is the Southern Route that snakes through Tanzania to Tanga port.

But because of business interests, the Central Route was ruled out leaving Uganda and Oil Companies with a task to choose the right course between the north and south. This impasse is proving to be a hard task to accomplish considering the latest developments.

On 3rd March, President Museveni and Magufuli announced they had agreed to construct a pipeline linking Uganda’s oil to Tanga port. Last year, President Museveni had a similar understanding with President Kenyatta. The Museveni-Magufuli decision didn’t go down well with Kenya.

In a communiqué issued after President Kenyatta’s State Visit to Uganda last August, the two leaders said the development of a crude oil export pipeline needed to be implemented expeditiously to avoid any further delay in commercializing especially Uganda’s petroleum resources which were discovered nine years ago.

However, it looks like fresh decisions need to be made. This impasse has been fueled by French oil company Total which prefers to use the Tanzania route because they don’t feel safe in Kenya, Tullow, another oil company prefers Kenya.

Manoah Esipisu, Secretary of Communication & Kenya State House Spokesperson, in a statement on Sunday announcing the meeting noted that in construction of the pipeline, Kenya favours the “northern route” through Lokichar, because as part of the Lamu Port, South Sudan, Ethiopia Transport (LAPSSET) project, it would transform infrastructure and the way of life of the people in the towns and counties across its path.

But in all this mix, Uganda has maintained that they prefer a cheap option to export its resource. A Tullow official in Kampala in an email interview reiterated that their preferred and cheap route is the one that goes through Lokichar especially that they are working in that part of Kenya.