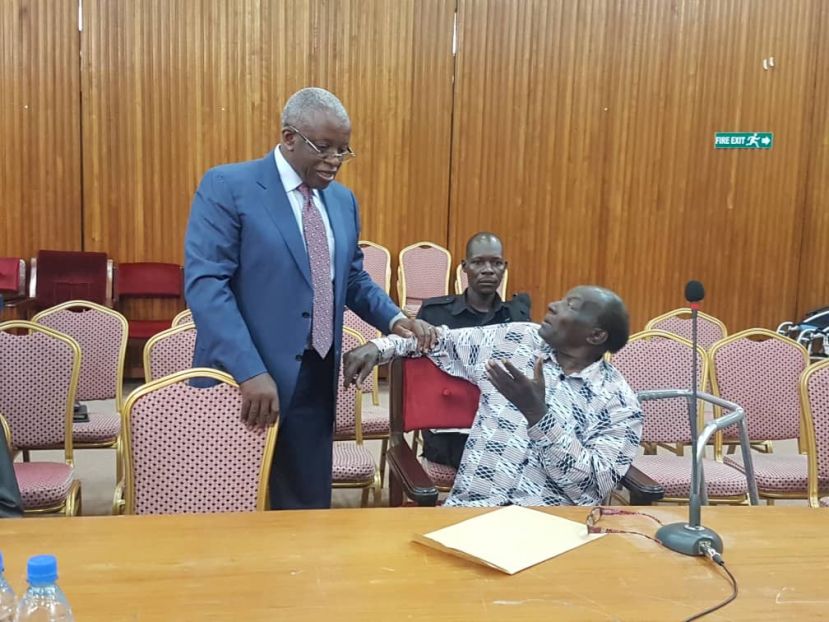 Mbabazi and Kanyeheimba lost their bank under the orders of Bagyenda

At the peak of his political career, in 2012, John Patrick Amama Mbabazi was not the one to lose a battle as he was the regime’s king maker. Yet when Justine Bagyenda, the former Bank of Uganda director for supervision, attacked his bank, National Bank of Commerce (NBC), Mbabazi lost and is still wailing over the loss.

Bank of Uganda, in 2012, accused National Bank of Commerce for being undercapitalized. The central bank then with, all the might, moved to close down the bank before passing it on to Crane Bank. Shareholders of NBC now blame Justine Bagyenda, the former BoU director supervision for closing their bank.

Former owners of NBC Mathew Rukikaire, Amama Mbabazi, businessman Amos Nzeyi and others while appearing before parliamentary Committee of Commissions, Statutory Authorities and State Enterprises (COSASE) testified that despite a 2012 BoU monitoring report indicating that NBC’s total assets being Shs21b, above the then minimum capital threshold of Shs10b, the central bank went ahead to close the bank.

“BoU continued claiming that the capital of the bank was being eroded yet this was caused by BoU itself. This was made worse when NBC was unfairly slapped with illegal civil penalties of Shs 2m per day by Ms Bagyenda. It is very clear to us that senior staff at BoU were determined to fail NBC,” he said.

“BoU asked us to raise a shortfall of Shs 7b. We raised it in 4 days. There was now a shortfall of Shs 300m and they did not even give us 1 day to raise it. We had demonstrated capacity to raise money. Why the central bank did chose to take this drastic action as the law requires them to do. The logical conclusion is that they must have had bad faith,” Mr Mbabazi added.

On his part, Mr Nzeyi narrated how he secured a Shs7b loan from the then Imperial Bank (now Exim Bank) but was then confronted by Ms Bagyenda demanding the source of the money. Mr Nzeyi claimed he now pays Shs175m per month to Exim Bank in partial instalments to clear the outstanding loan.

While this was happening Mbabazi whom many people believe was untouchable failed to stop the long punishing arm of Bagyenda. And indeed Bagyenda moved to close down NBC by deploying security officers at difference NBC premises.

Mbabazi, when asked to explain circumstance leading and during the closure of his bank, said Bagyenda didn’t follow the law in the process of closing the bank which was not undercapitalized. Mbabazi said the manner in which the Bank was closed was unfair and not transparent.

“When they were in the process of closing the bank, after they seized it with security operatives, I called Gen. Kayihura who was the IGP then, I told him, ‘Kale, this is happening at NBC, are you aware?’ he said, no, I told him, please follow it up and let me know, and if it’s a robbery, please take action. He neither came back to me nor did the actions at the bank stop,” Mbabazi told the committee.

Practically, Mbabazi despite all the political power he wielded had lost to Bagyenda. Bereaved, Mbabazi and Nzeyi have vowed not to forgive Bagyenda for destroying their dreams.

The NBC shareholders said they could have saved their bank but they accused Bagyenda of being hell bent on closing the bank and selling it off yet it was not undercapitalized.

According to the shareholders, Bank of Uganda had told them that their bank was undercapitalized and that they were required to recapitalize it with shs7b within seven days. They claim to have raised the money in four days. But despite this, the bank was seized off and sold within one day.

“The bank of Uganda therefore shouldn’t have chosen the drastic decision of closure even having raised the amount of money they had asked for. This points to the ulterior motive, that they had their own other intentions for closing the bank, and for that, we demand Shs290B in compensation for the losses that we incurred,” Mathew Rukikaire, one of the former shareholders told the committee.

Mbabazi is not the first person to accuse Bagyenda for misusing her powers in closure of Banks, COSASE committee members and its Chairman Abdul Katuntu last month accused the former Executive Director in-charge commercial Banks of usurping the powers of the legal department of the bank after discovering that she took over the drafting of the terms of engagement between Bank of Uganda and MMAKS which documents could not be traced by the committee.

The former owners of Crane Bank Wednesday told cosase they were given orders to buy National Bank of Commerce Justine Bagyenda. Dr. Sudhir Ruparelia revealed that when NBC was being liquidated Bagyenda ordered former Crane Bank Managing Director A.R Kalan to take over the assets of NBC.

She called the Crane Bank MD and informed us that she was directing Crane Bank to acquire these assets. She was not asking. It was an order from the authorities,” Mr Ruparelia said, adding that Crane Bank paid Shs 1.2b to buy deposits, treasury bills and non-performing loans from NBC.