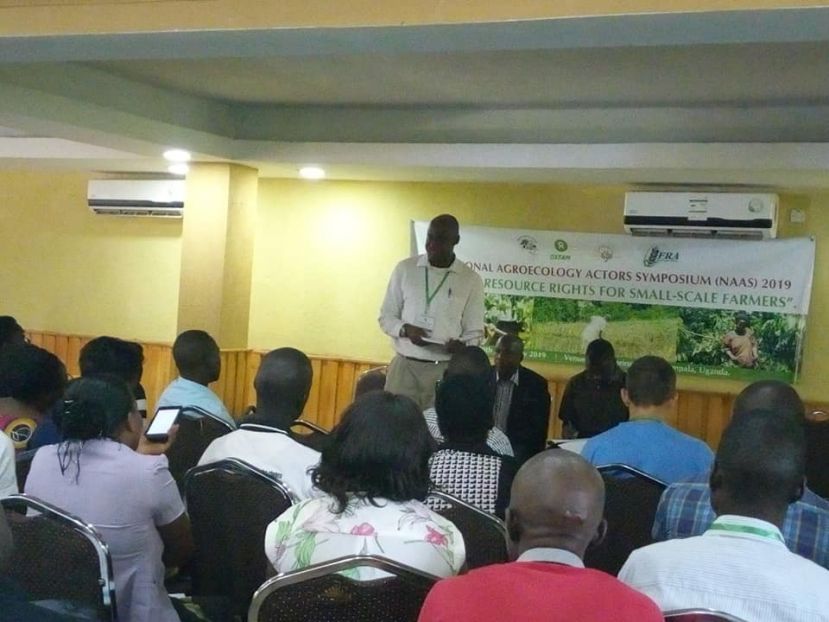 Hakim Baliraine speaking at the symposium

There is need to return to traditional farming methods in order to protect the agriculture sector because modern farming techniques are a danger to the sector, Hakim Baliraine, the chairperson of Eastern and Southern Africa Small Scale Farmers Forum (ESAFF Uganda), told journalists during the first National Agroecology Actors Symposium (NAAS 2019) which took place at Silver Springs Hotel in Bugolobi, Kampala.

Baliraine is convinced that new farming methods which includes use of hazardous insecticides and fertilizers are not only disadvantageous to the soil but also crops harvested contain chemicals that can cause diseases like cancer, ulcers and high blood pressure. He explained that there is need for farmers to keep land and the soil alive and able to support crop growing and offer nutritious harvests.

“We have semi illiterate farmers who can’t or don’t read labels of these insecticides and fertilizer so they apply the wrong dosage. This over dose of chemicals causes diseases. Therefore in the process of agroecology, we need to reduce or remove the use of inorganic products,” Baliraine said.

It was agreed that land must be properly managed by all stakeholders in the sector and that farmers must be trained to this effect. Farmers said better policies must be put in place to protect small scale farmers’ rights that are increasing being abused at varying scales.

Some of the abuses relate to land ownership with women being the most affected. Land largely is owned by men with women only being able to use it but not own it.

Moses Onen from Pelum Uganda predicts that the scramble for land is going to increase as population also grows. This is can only get worse because land documentation spelling out who owns which in Uganda is poor. This makes access to land hard for some people. It also gives land grabbers opportunity to take advantage of ignorant land owners.