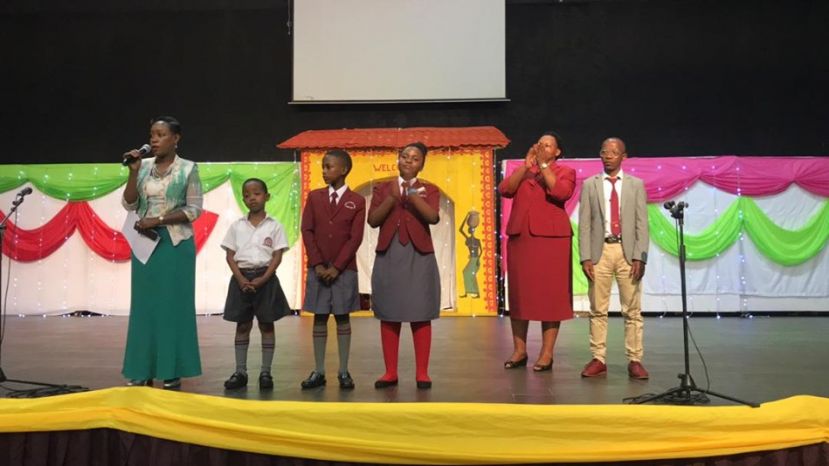 Uganda’s youngest recording hip hop artiste, Patrick Senyonjo aka Fresh Kid, 8 years, has been appointed by state Minister for Youth and Children Affairs Florence Nakiwala Kiyingi to do advocacy work that will see young children off the streets of Kampala and Uganda at large.

The minister also appointed Ian Calton Muyimba, the new head boy and Agartha Ahumuza, the new head girl of Kampala Parents School to tea up with Fresh Kid, also a pupil at the same school.

The minister who was presiding over the swearing-in of prefects at Kampala Parents School Friday morning said that he will present the three youngsters to the Prime Minister to be given instruments of power.

“This is a sign to show that even if you are coming from a well to do family as a child, your  primary responsibility should be to look at people who don’t have the same privileges because we are striving to bridge the gap between the well to do people and the underprivileged,” Nakiwala said.

She said the three infants will be tasked with the role of advocacy of making sure they encourage fellow children not to return to the street and to encourage people who have to give back to those who don’t have.

“We passed an ordinance as Kampala Capital City Authority banning street handouts to street children but that doesn’t take away the fact that there are good-hearted people who would like to continue with the spirit of giving.

They are supposed to ensure that the giving is done amicably and through the right modules to be able to reach out to those children,” Nakiwala explained.

“On the main streets of Kampala alone, we had 10, 000 street people spread across the main hotspots and peripherals who were working in shifts but now we have completely eradicated the problem.

What we want to ensure is sustainability and rolling out to Wakiso and the metropolitan area, which means we have to continuously engage their fellow children.” She said.