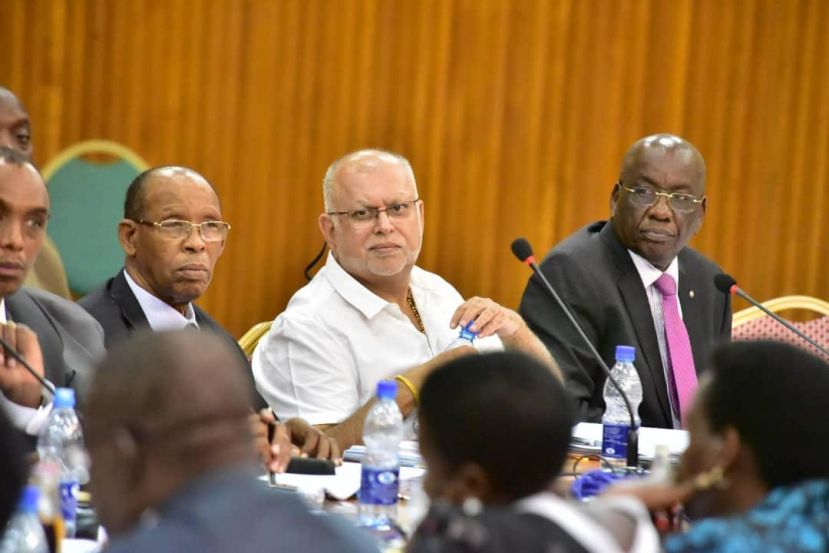 COURTESY PHOTO Businessman Sudhir Ruparelia appearing before COSASE during the inquiry into mismanagement of Bank of Uganda.

Dr. Sudhir Ruparelia has said that he never purchased any properties from the Departed Asians Properties Custodian Board (DAPCB).

He then challenged the decision by COSASE to summon him in relation to how he acquired five houses that are said to have been part of departed Asians’ properties.

A COSASE Sub-committee headed by Makindye East MP Ibrahim Kasozi, which is investigating the alleged fraudulent acquisition of departed Asians’ properties, had on Tuesday, December 3, 2019, invited Ruparelia to appear before the committee on Wednesday and explain how he acquired five properties.

The properties in question are Plot 43 on Jinja Road, Plot 24 on Kampala road, Plot 8 on Colville Street, Plots 3 and 5 on Bombo road (all in Kampala) and Plot 26 on Republic Street in Mbale Town.

But Ruparelia, through his lawyers of Walusimbi & Co Advocates wrote back to Kasozi, saying their client cannot appear before Parliament since he has never purchased any properties from the Departed Asians Properties Custodian Board (DAPCB).

“In the result, he (Sudhir) requests for your advice as to why his presence is required, especially it being that he has never purchased any property from the DAPCB nor has he claimed any property on behalf of anybody,” the lawyers wrote in a December 3 letter.

About the building on Plot 43, Jinja Road, Mr. Ruparelia said what he possesses does not march with the descriptions of COSASE. However, he promised to make a search at the Lands Registry and report to Parliament.

The city tycoon insisted that he possesses a genuine land title for the property on Plot 8, Colvile Street in Kampala, which he said he purchased from registered owners.

For Plot 24 on Kampala road, Mr. Sudhir said he bought the property under his company, Meera Investments Ltd and that in 2012, he won a court case, which DAPCB had instituted against him challenging his ownership.

“With your guidance, we need to advise our client whether matters decided upon by court can be subjected to an inquiry,” the lawyers’ letter to COSASE states.